Mr Alan John Grant, M.A.(Aberdeen), an assistant master at the School since 1927, had been the senior science master and the first XI cricket coach (along with Charles Marshall) before he was appointed as Headmaster in January 1943. He faced many difficulties: in 1940, ten masters had joined the armed forces against Hitler, there was hardly any money to spare for the School either from the Transvaal Education Department or from the parents’ community for much needed facilities and improvements to the grounds: the office administration and records were in a state of disorder; previous Inspection Report commented on the lack of Art and Music: “while this situation lasts, the School can hardly build up a worthy cultural tradition”.

The new “Boss” – as he was respectfully nicknamed – moved into Tsessebe house. With the support of his wife Kitty, and stalwarts on the staff, he vigorously set about improving matters. The 1944 Inspection Report stated that “the appointment was full of promise”.  A Parents’ Committee was formed for the first time. A Ground Improvement Committee was formed for the first time. A Grounds Improvement Committee was elected. A school fête raised £2 074, of which £700 was given to charities. Trees were planted on the northern boundary, and the main cricket field was planted with grass by boys who “volunteered”.  Money was raised for the swimming pool which was built on a pound-for-pound basis. Stone tiers of seats at the pool and on the side of the rugby field bear testimony to the drive of men like Jack Collard and Vic Robson. Many Old Boys of that era proudly recall the “hard labour” and “Collard specials” of P.T. periods. The Municipal refuse was dumped on the sloping east of the “B” rugby field, and by 1950 this was covered by grass. It was however, too small for games purposes and it became known as “Collard’s Folly’!  Below, on the present “C” field, six matting wickets and two concrete pitches were made for nets. 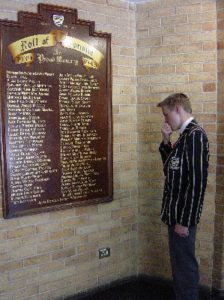 The impact of war on the School and on Mr Grant was very marked. The War Memorial (1914-18 War); the memorial gates for his close friends, D. Dashwood and F. von Linsingen; and the Rankin Gate were constant reminders of Masters and Old Boys who lost their lives on active service. There are 35 names on the Roll of Honour for the First World War, and 133 names on the Roll of Honour for the Second World War which is in the foyer of the Memorial Hall.

Mr Grant firmly believed that the boarding houses constitute the backbone of the School. In his opinion a fourth boarding house was needed. Permission was granted to Mr R.S. Jones (known as “Taffy” to generations of boys) to run a private boarding house, Casson Lodge, situated near Mpiti House in Belgravia, for about 50 boys. It was gutted by fire in 1955. In 1956, Thabana House, built as a fashionable residence for the Marx family in 1904, and used by the Y.M.C.A. as a hostel for 1939-1955, was purchased by Mr. R.S. Jones for the sum of £7 500. He ran this house for 72 boarders until December 1981 when it was purchased by the Jeppe Schools’ Trust. It was certainly an advantage to have 72 boys selected without the limitations imposed in the other hostels. They came from all parts of South Africa, Botswana, Zambia and Zimbabwe. As Sable House, they have contributed much to the academic, sporting and cultural life of the School, and produced a number of Head Boys and outstanding sportsmen.

The official School hostels also experienced changes during Mr Grant’s tenure of office. Sir Julius Jeppe’s residence, “Friedenheim” (Tsessebe House since 1915), had charm and character, but it was considered unsuitable as a school hostel by the Transvaal Education Department. Mr. Grant tried hard to save the house which had an interesting history, but even the Historical Monuments Commission was unsuccessful.  In 1962 Tsessebe House was demolished and Mr and Mrs Grant, 80 boys, and two housemasters moved into the new residence.  A similar fate befell the old Mpiti House which had also been a residence of Sir Julius Jeppe. The modern building accommodated 64 boarders. Oribi House remained untouched. There, Mr and Mrs Schoon (the Vice-Principal and his wife) lived for many years.  Mr Arthur Greig-Gass succeeded them. 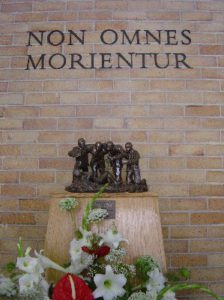 New buildings were erected at the school in 1961 and 1962.  A modern Science block and classrooms were built on part of the koppie and on the space provided by the tuck-shop, behind the prefects’ room.  The new hall and change-rooms were constructed where the upper shooting range and bicycle shed used to be, near the Manual Training Centre.  The Memorial Hall, which seats 850 people, has a magnificent stage which allowed for a revitalization of the Dramatic Society and the Choir.  The whole school could be seated for assemblies and for the Annual Remembrance Day Service.  The roll of Honour in the foyer, the mosaic by Cecily Sash, the specially-capped oak chairs for ceremonial occasions and the badge with the School moto testify to the monumental work done by the Headmaster, staff, boys and parents in raising money.  The hall is indeed a fitting memorial to those who gave their lives in the Second World War. Omnes non morientur – “They will not wholly die” – was the epitaph adapted by Mr Grant from the works of Horace.

The academic standards of the School and the School’s sporting reputation were maintained and enhanced by the staff, characterized by high qualifications, dedication to their vocation, loyalty to their Headmaster whom they greatly respected, a fierce pride in the traditions and reputation of the Jeppe Schools, and above all, stability.  After the war, Mr Grant appointed a number of returned soldiers and young men who assisted the more experienced “old guard” of Jackie Schoon, “The Boot”, Bok Erasmus, Jack Collard and Vic Robson.  Some teachers from the United Kingdom were also appointed, amongst them Bainbridge (M.A. History), Knox (M.A. English), and A. McLeod (M.Sc.). There were thirty-six men and two women on the staff.  For five years there was no need to make alterations to the timetable!  The photographs of those teachers of this era, who gave more than twenty-five years’ service, hang on the wall of the Payne Hall staircase.

Salaries were poor, but only a few teachers left the school and the teaching profession.  Dennis Etheredge became a distinguished director of Anglo American Corporation.  Herbert Nicholas went into law and became a judge.  John Fullerton, Head Boy in 1940 and a Springbok cricketer, reluctantly left teaching and later became a director of Safmarine.  Later, Benckenstein, Collier and Stewart became principals in Rhodesia.  B. Potgieter, H. Cunningham, F. McDougall and I. Schoeman became principal in T.E.D. schools.

The curriculum at this time was basically orientated to the academic requirements of University entrance and Matriculation examinations.  Every boy studied English, Afrikaans, Mathematics and Science.  Optionals were limited to Latin and History; Latin and Geography: Geography and History: or Book-keeping and Woodwork.  One must remember that in 1950, only 18% of an age group matriculated.  Jeppe had an “elite”. Boys who were not academically inclined went to Junior High Schools and left after Standard Eight.  About 1960, the T.E.D. introduced the A, B and C streams and enforced stricter zoning.  Many critics feared that these two factors would lead to a drop in the standards of Jeppe.  Mr Grant refused to listen to such views, and was adamant that standards could, and would, be maintained.  There were full-scale examinations four times a year.  Boys certainly had the opportunity to learn how to prepare for examinations.  Some modern critics would argue that there was too much spoonfeeding of factual knowledge, an obsession with examinations, and not enough emphasis on the skills and tools for further leaning:  too much talk and chalk, and not enough remedial work.  The fact of the matter is that at university level the product of this system achieved one of the best records of any South African School.

In the field of sport, these were the golden years. The number of Springbok and Transvaal caps in Cricket, Rugby, Swimming, Waterpolo and Athletics are a tribute to the coaches. Henry Beckwith, after whom the Transvaal Nuffield Trials week is named, has an enviable record as master-in-charge of cricket.  Stories, emanating from King Edward VII School and Pretoria Boys High, about “Marshall aid” cannot detract from the achievements and fame of players like Ian Fullerton, Gerald Richie, Ivor Littleford, John Lodwick and John Baillie.  Rugby coaches like Jack Collard, Geddes Dickerson and Steve Geldenhuys achieved outstanding rugby results, and helped to develop players like Des Sinclair (1947) and Wilf Rosenberg (1951) (Springboks), Dudley Watt (1955), Dickie Viljoen (1955), Tony de Bruyn (1963), Gwyllam Davies (Transvaal), Ian Bond (Rhodesia).  Famous athletes of the Grant era were Springboks R.Wilkie and Dave Sandler. Swimming, Waterpolo, Atheletics and Tennis achieved high standards. Rowing started in 1959.

Cultural activities were varied and stimulating – S.C.A., Debating, Dramatics. Literary Society, Chess.  Old Boys of the era can recall the fun on camps to the South Coast.  These were organized by masters – Jack Collard, “Taffy” Jones and “Scotch” McLeod.  Overseas tours led by master such as Denys Luckin and “Taffy” Jones were popular.

After nineteen years as Headmaster Mr A.J. Grant retired, leaving a school which had a fine reputation.  On the occasion of this eightieth birthday, when many past pupils showed their respect, affection and gratitude to “The Boss” and Kitty, he said: “We are proud of having been part of a School that has contributed men of distinction; leaders in their chosen careers”.