The enrolment was now 450. The three boarding houses were full, and the rented Mpiti was now purchased. Five classrooms were added on the south-east – they were later called “the slums”.

The outstanding Jeppe athlete, L.B. Betts, was making his mark. Though Betts was only sixteen at the time, Mr Manduell said of him that he was “certainly the most wonderful runner we have had or are ever likely to have”. He smashed existing records, one of which still stands (1989) – namely his equivalent 100m (10.7 seconds). Still a school boy, he represented South Africa at the 1924 Olympics. Horace Cameron was beginning to show his ability at cricket. Soccer faced a crisis – the threat of Rugby – but despite appeals from such eminent persons as J.H. Hofmeyr and Sir William Dalrymple, the change did not come for another fourteen years. G.J. Malherbe became the School’s first Rhodes Scholar.

In commemoration of the war years, a tablet in memory of J.H.A Payne was placed in the Hall, and unveiled in 1920. Work on the Pavilion War Memorial lasted from 1922 to 1926, when the unveiling took place, in front of one thousand spectators, by General J.C. Smuts. The pavilion function proved a white elephant, and this section was converted into a delightful library and at present houses two classrooms.

Many masters and senior boys were called out on emergency service when the 1922 industrial strike became a revolt. They were on active service for a week. The School was the headquarters of the Eastern Districts Special Police.

An Old Boys’ Club was revived, and a School Boxing Club (the last boxing match being between the present Headmaster, David Quail, representing Tsessebe, and Angus Morrison, representing Oribi, in 1950). A Tuck-shop and the Dramatic Society started.

In 1923, the School was undefeated in football, cricket, athletics and shooting. From 1921-1924 the School played 44 games of football, winning 42 and scoring 223 goals to 33 against them. There were 8 victories in a row against King Edward VII School.

School camps were inaugurated by Mr C. Hitge in 1923, and continued by others – among them Mr A.L. Cheeseman, Mr R.S. Jones and Mr A. Mcleod. In the same year, the School had a jazz band – “Black Kittens”. 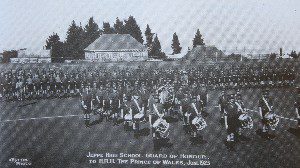 Sir Julius Jeppe died in 1929. He was associated with the School from its beginning; he was elected to its first Governing Body in 1906; he became Chairman after the war: and was knighted in 1922. His family presented the School with a large portrait of Sir Julius which today looks down benevolently form the back of the Payne Hall.

In 1929, 5 of the 16 Springbok Cricketers to tour England were Jeppe Old Boys – Lateral, Vincent, Cameron, McMillan and Christy.

In 1933, the 30-year old Inter-High School Sports died, and in1935 Rugby came to Jeppe. It ‘insolently reared its triumphant head on high” on 8 May. The School had won the Soccer Shield 21 times, 13 times in succession.

In 1936 “Mandy” retired after 31 years at the School. He was a guide, philosopher and friend to all – a man whose serene good nature won him the respect of parents and boys alike. His old colleague A.H Childe took his place.