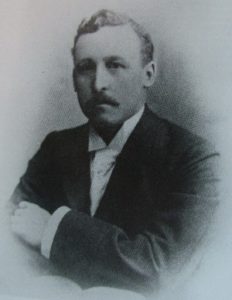 The Rt Hon. Julius Gottlieb Ferdinand Jeppe, O.B.E. Born in Germany, Julius Jeppe emigrated at the age of 11 to the Transvaal with his parents. In 1870 the family settled in Pretoria, where Julius attended the Pretoria Public School. At the age of 17 he fought in President Burgher’s disastrous expedition against the Pedi chief Sekhukhune.

With the discovery of gold on the Witwatersrand in 1886 the Jeppes moved to Johannesburg, where a syndicate controlled by the family bought a large area of land known as Randjieslaagte, between the present Commissioner Street and Hospital Hill. The land bore no gold, however, and the syndicate, the Ford and Jeppe Estate Company, developed it as a township. This was proclaimed in 1889 as Jeppestown.

Julius’ brother Carl was a founder of the Witwatersrand Council of Education, which set up the Jeppestown Grammar School. When this school was re-established as Jeppe High School after the Anglo-Boer War, Julius Jeppe was elected to its first governing body and was its chairman from about 1918 until his death in 1929. He had been knighted in 1922.